J
Written by Jesse Pizarro
Updated over a week ago

In general, HotStreak scoring is straightforward - you make a prediction, choosing an amount to risk at the given odds, and you either win or lose. Easy, right?

What happens to my entry if one of the selections is refunded?

Example: You make a 3-selection entry that features a Yankee, a Cowboy, and a Warrior. The Cowboy selection is refunded. In this case, we would grade the entry as a 2-selection entry, featuring the Yankee and the Warrior.

Example: You make a 4-selection entry that features a Yankee, a Cowboy, and two Warriors. The Yankee and the Cowboy selection are refunded. In this case, the entry as a whole will be refunded, because the remaining entry would feature just two Warriors and no players from other teams, making it an invalid entry.

Wait a minute - the over just hit on a rushing yardage prediction but the last play was a kickoff return!

I JUST made a prediction and SAW it win on my TV; how come I wasn’t credited?!?!

It can be a bit tricky to follow a game on TV because broadcast delays affect when you see things on TV that have already happened.

In other words, sometimes our app is ahead of the TV feed. You can tell because the game clock in the app will be ahead of the one on your screen.

In rare cases, this can mean that you (1) take the over on a Steph Curry 3-pointer selection; (2) watch Steph hit a three a few seconds later; (3) not get credited with your prediction winning. That’s because Steph actually hit the three before you made the prediction, even though you watched it on your TV a few seconds later - due to the delay in the TV broadcast.

This shouldn’t happen too often, but it does occasionally confuse users. The best way to be sure is to look at the Beginning and Ending clock on your prediction. If your prediction runs from 11:00 - 8:00 of the first quarter, Steph’s three would have to fall in that window to count - no matter when you watched it on your TV.

If you have questions about a prediction, or feel that there may have been a error, you can always refer it to our support team: 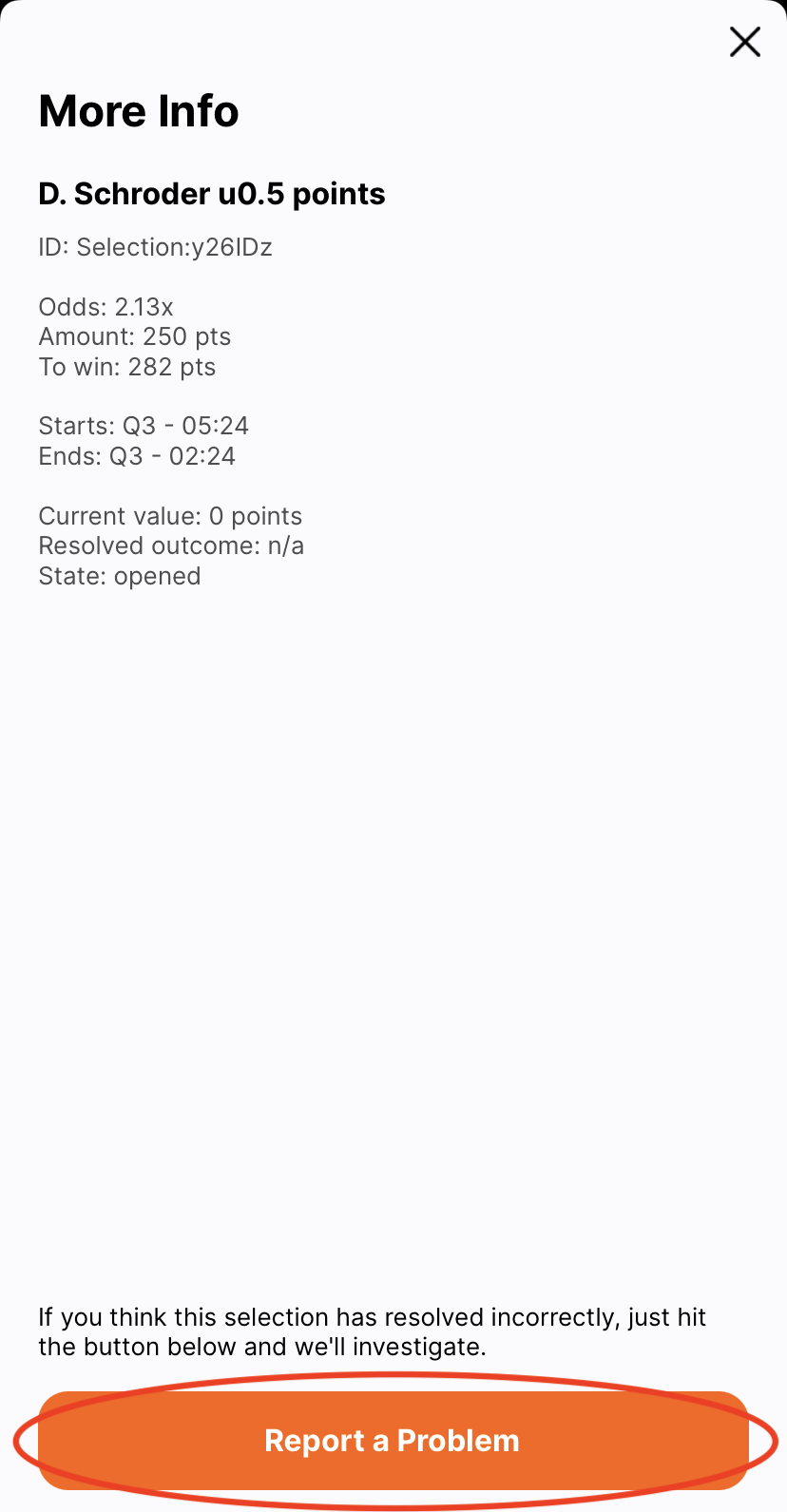 Any Hit: If the batter is credited with a single, double, triple or home run.

Any Out: If the batter makes an out. Note that if the batter hits into a Fielder's Choice, that is not counted in this category.

Walk/Other: Any outcome that's not covered by the other categories: Walk, Hit by Pitch, Reached on error, Catcher's Interference, &c.

Total Bases: All bases achieved by the batter's HITS only. Anything that does not count as a HIT (walk, HBP, reached on error, &c.) will not be counted towards total bases.

Did this answer your question?